In July 2019, Pondera drew up the tender documentation for Westenwind 1 B.V. for the design, construction and maintenance of two wind turbines in the vicinity of Nieuwleusen, The Netherlands. The two wind turbines have a combined maximum installed capacity of 9 MW. The project is another positive step towards the Province of Overijssel’s goal in achieving 85.5 MW of installed wind energy by 2021.

Pondera has announced an “Invitation to Tender” asking market parties to make an offer for the design, realization and maintenance of the wind farm. A distinction is made between the actual wind turbines, the crane stands, access roads, cabling and the transformer station. A special and challenging aspect is that both contract terms of the UAV-gc 2005 and Fidic Yellow are used. The offers will be assessed on both quality and price. The best market parties are expected to be selected for the wind farm before the end of the year. Once the wind turbines have been installed, Pondera will also take on contract management to ensure that everything proceeds according to the agreements made.

The support of tenders is a new service that Pondera has been offering to various customers for the past two years. Pondera can also assists in contracting, construction supervision, mediating and concluding PPAs (power contracts) and contract management of sustainable energy projects. For more information, please contact Angelique Strijker at: a.strijker@ponderaconsult.com or call 06 15 12 21 73.

Last week the Dutch media was very enthusiastic about the fact that the Netherlands is the first country to place the world’s largest offshore wind turbine.

Key figures for the Haliade-X 12 MW

Pondera Development and SIF Holding, together with GE Renewable Energy, are developing the Haliade-X on the Maasvlakte 2 in Rotterdam. The development of the innovative Haliade-X project in Rotterdam has been made possible thanks to Pondera’s extensive knowledge and many years of experience in Dutch wind energy legislation and regulatory policy. The increase in size and scale of (offshore) wind turbines is an important step in generating more sustainable energy, accelerating the energy transition and thereby limiting the effects of climate change.

The offshore wind turbine prototype will be installed onshore in order to ease access for testing and monitoring purposes. This will also allow GE to collect the data needed to obtain the Type Certificate, a key step in commercializing the Haliade-X.

The Haliade-X can generate 67 GWh of electricity annually. That is enough power for 16,000 European households and thus saves 42 megatons of CO2. In the fall of 2019, the Haliade-X will generate renewable energy on the SIF site on the Maasvlakte.

Windy areas in countries that have well-developed wind energy markets, like the US, UK or Germany, are gradually being filled by wind farms. Renewable energy developers are therefore looking at opportunities to further develop wind farms in areas with low to medium wind speeds. Other regions with lower wind speeds are also being considered in new and upcoming markets like parts of West and Southern Asia, South-East Asia, Africa and other mid to lower latitude regions around the world.

Wind turbine manufacturers are attempting to cover this segment of the market by producing turbines that are specifically targeted to lower wind-speed sites and conditions. This is done by providing customers with higher turbine towers, combining existing generators with newer and longer turbine blades or even designing new generators from scratch. As wind turbines become more reliable, efficient and less costly, it is expected that even low wind-speed conditions in near-shore and offshore locations will also be further exploited in the future.

What does the wind energy industry consider low or medium wind-speed turbines? According to the IEC 61400-1: 2019 (editie 4.0) international standard regarding wind turbine design, when looking at annual average wind speeds, we find that wind turbines are categorized into four design classes: I (up to 10 m/s), II (up to 8.5 m/s), III (up to 7.5 m/s) and S (a site specific class). When turbulence intensity is considered, the following categories are added as suffixes to the classes:  A+ (a turbulence intensity up to 0.18),  A (up to 0.16), B (up to 0.14) and C (up to 0.12). Furthermore, the 10-min average wind speed with a 50 year return period in normal and typhoon conditions is also considered in the classification (Table 1). For example, class IA+ is then the most extreme wind turbine class outside of class S.

Below, we look at the latest wind turbines designed for the low to medium-wind speed market. Each turbine mentioned on our list is offered by a different manufacturer in order to get a good view of what is or will become available in the near future. This list is not a full overview, but it does cover most of the major players in the wind turbine industry.

First on our list is the largest onshore dedicated wind turbine in the world in terms of rotor size as of writing. The SG 5.8-170, as obvious from its name, has a rotor diameter of 170 m, consisting of a three-stage gearbox and a 5.8 MW generator which is also the most powerful in the Siemens Gamesa onshore family of turbines. Hub heights are site specific and can range from 100 to 165 m according to the company’s website. The turbine is specifically recommended for low to medium wind speed conditions, with the first prototype expected to be built in the third quarter of 2020. 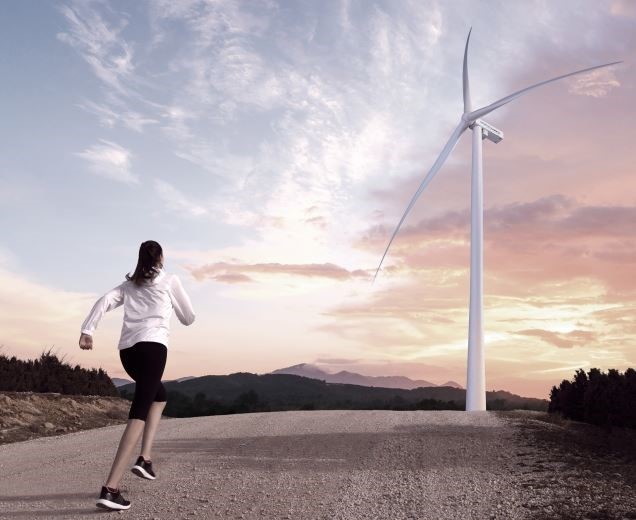 The V162 has the largest rotor size of all onshore Vestas wind turbines to date and is part of the newest EnVentus platform utilizing permanent magnet generators. The IEC S classed turbine is designed for low to medium wind sites but also suitable for higher wind speeds. Hub heights are expected to range between 119 and 166 m. As the first company to globally install 100 GW of wind turbines, Vestas aims to target the low to medium wind speed market with the EnVentus platform while continuing to develop also smaller turbines in the 3 MW range for the lower wind speed categories. The V162 is expected to roll out as a prototype in the middle of 2020. 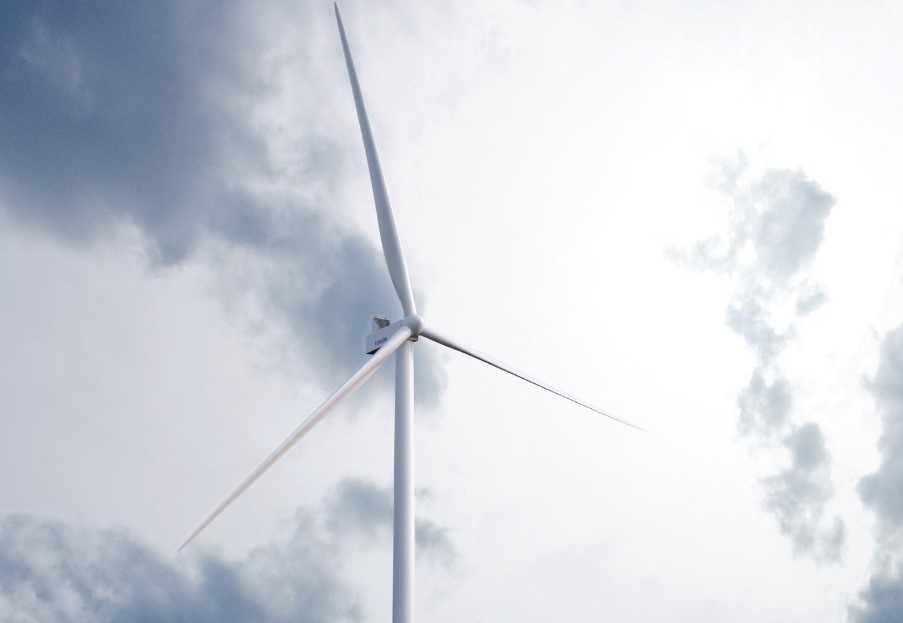 The largest turbine in the Enercon line, the E-160 EP5 was presented at the WindEurope Conference in Bilbao in April 2019. Based on the Dutch Lagerwey technology acquired by Enercon in 2018, this gear-less permanent magnet turbine has a class IIIA designation, with a 160 m rotor size, a hub height ranging from 120 to 166 m and a rated power of 4.6 MW. The prototype is planned to be tested in early 2020.

The GE 5.3-158 is part of the new onshore Cypress platform of turbines designed to be scalable over time in order to offer wider ranges in rated power and hub heights. The turbine was presented at the WindEurope Conference 2018 in Hamburg. It is currently GE’s largest and most powerful onshore wind turbine and builds on the previous GE 4.8-158 turbine design. The turbine was installed at ECN’s Wieringermeer test site, waar Pondera Consult assisted in the permitting, noise and shadow studies. Pondera was also responsible for the wind resource assessment and the energy yield calculation for the wind turbine’s Dutch subsidy application. Despite the 5.3-158 being the largest onshore GE wind turbine, it is still not GE’s largest. This prize goes to GE’s offshore Haliade-X with a rotor size of 220 m, making it currently the largest wind turbine in the world. The Haliade-X is being installed for prototype testing in the Port of Rotterdam’s Tweede Maasvlakte area by GE and Future Wind, a joint venture between Sif Holding and Pondera Development.

In October 2018, the largest Chinese wind turbine manufacturer Goldwind announced the development of the GW155-3.3MW as part of the 3S platform. If built, it will become the largest Chinese manufactured onshore dedicated wind turbine in terms of rotor size. The permanent magnet direct-drive (PMDD) GW155-3.3MW was announced together with the low wind-speed offshore GW168-6.45MW turbine that is also adaptable for typhoon conditions. This clearly indicates Goldwind’s increased focus on the low wind-speed market segment, which is also very important for China being the largest wind energy market in the world.

The Nordex N149/4.0-4.5 is the winner of the 2018  Windpower Monthly Wind turbine of the year award in the +3 MW category. The turbine has found success in several parts of the world, including a recent order of 74 turbines destined for the US state of Oklahoma and another 35 turbines ordered by Acciona for the state of Victoria in south-eastern Australia. The turbine is part of the Nordex’s Delta4000 platform and was first installed in August 2018 at the Wennerstorf II wind farm in Germany. The S class N149/4.0-4.5 turbine has a 3-stage gearbox with a double fed asynchronous generator scalable up to rated power of 4.5 MW and is offered with a hub-height ranging between 105 and 164 m. Surprisingly, Nordex has recently announced their newest turbine in the Delta4000 platform, the N155/4.5 with a rotor diameter of 155 m. Production of the N155 is expected to start in the later part of 2020. 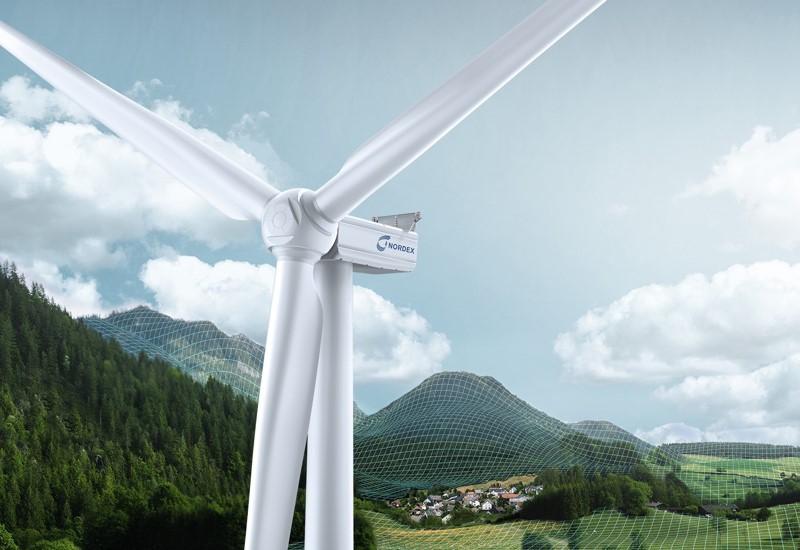 The only low wind-speed “offshore” turbine on our list and probably one of the better looking ones, Envision Energy’s  EN148-4.5 was designed together with Italian designer Stefano Giovannoni. Envision Energy is the second largest Chinese manufacturer, with more than 2600 installed turbines world-wide and claims to be the leader in the low to medium wind-speed Chinese turbine market. The class S designated EN148-4.5 has a 3-stage gear box, a 4.5 MW rated power generator and a rotor diameter of 148 m. 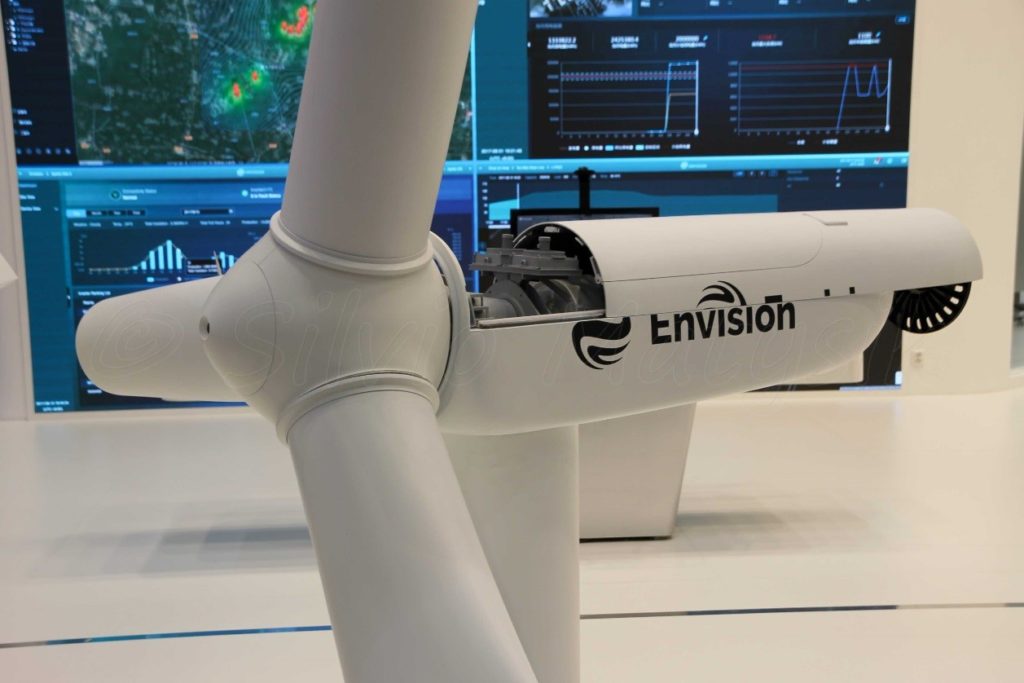 Senvion’s largest onshore wind turbine was presented at AWEA’s WINDPOWER 2018 conference in Chicago, US.  4.2M148 EBC is certified in the IEC S class, based on the IEC IIIB classification, making it a flexible turbine for the low to medium onshore wind-speed conditions. It consists of an updated gear-box design with a rotor size of 148 m and a rated power that can be maximized up to 4.5 MW. The turbine has been ordered to be installed at wind farms in Chile in 2020. 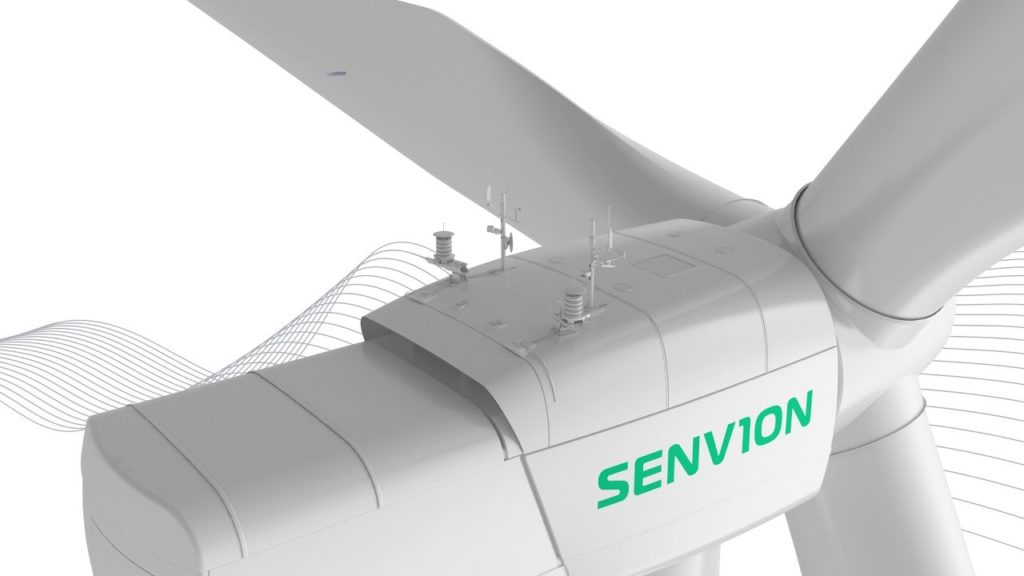 Whether bigger is always better really depends on the situation. In general, a large rotor swept area will convert more wind into energy. However there are many factors that need to be considered like the site specific conditions and wind climate, the costs of the turbine and its installation, the operation and maintenance costs, the turbine’s power curve and its overall capacity factor. All these factors play a role in the levelized cost of energy (LCOE). The “specific power”, which is the ratio between the rated power of the generator (also called the name plate capacity or nominal capacity) and the rotor swept area, is also an important factor. A very large rotor size combined with a smaller rated power would lower the specific power, reducing the amount of electricity generated. However, there are examples where lowering the specific power is purposely chosen in order to maximize the capacity factor, producing more stable and cheaper energy. In such cases, turbines like the Goldwind GW155-3.3MW or the Nordex N149 4.0 MW are sometimes more reliable options for developers than more powerful turbines.

My name is Haydar Hussin and I am a Renewable Energy Consultant at Pondera Consult and Wind Minds. I am involved in the development of wind energy projects in The Netherlands and abroad. My fascination for combining science and business gives me an interdisciplinary view on sustainable energy which I would like to share with the readers of my blog posts.

Available in Dutch language only

For more information visit our
contactpage